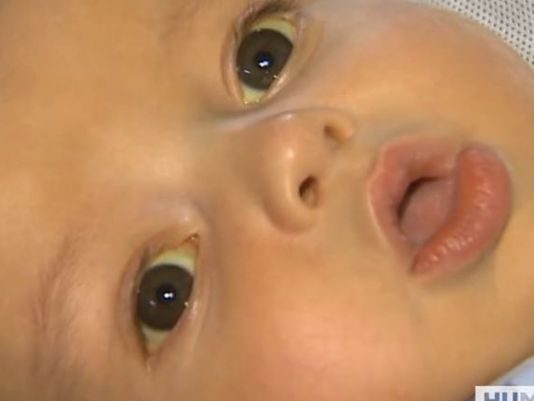 This is a touching story of a family that stands firm despite the trials.

BRUNSWICK, Ohio – A little boy named Brodie Tigue was born in May 2015.

After few days, Brodie’s mom and dad had noticed something different about him. His skin is far different from his sister and he had some yellow at the corners of his eyes. The parents brought him to his pediatrician and assured them that Brodie is fine and that those symptoms would soon go away. But more strange symptoms showed like dark purple bruising, alarming amount of blood when trimming his fingernails.

His mom named Traci knew that something is wrong. So they brought him to another pediatrician. Blood tests were made. Brodie was admitted to the Pediatric ICU and exploratory surgery was scheduled to see what’s going on in his liver.

When Brodie was just 3 months old, the results were received. And his condition is called biliary artresia, a condition in which inflammation develops within the bile ducts around the time of birth. The inflammation can occur in any of the bile ducts both inside and outside of the liver. Brodie needs a liver transplant to live.

He needed a live liver donor. And Traci is the best fit for him. Brodie needed a portion or “silver” of a donor’s liver. Support from family, friends and strangers came from hearing Brodie’s plight and many are willing to donate a portion of their liver.

Traci said, “To know that that many people are there for you to save the life of your little guy, how you can describe that? It’s the good stuff. It is the very good stuff.”

Supporters from social media emerged online calling themselves “Brodie’s Good Vibe Tribe.” BGVT t-shirts also helped the family to raise money for the expenses of the transplant. A GoFundMe page was also set up and donations poured in to the family.

Words spread all over the world and prayers poured to the family. On October 19, 2015 was the day of the surgery. His mom, Traci is the donor. She said, “Affectionately, I refer to myself as the silver of liver giver.” And that’s thirty percent of her liver became Brodie’s life-saving gift.

After straight 10 hours of surgery, Doctors warned them that Brodie would seem lifeless he was heavily sedated. But what happened is different as Traci talked to him like this “You’re doing so good! You’re my little man … our little warrior. We’re going to get you better.”

So little Brodie heard her. “His eyes flew open. His legs started trembling with excitement. I just didn’t even know what to do with myself,” said Traci. “What’s happening? He was supposed to be sleeping and non-responsive. He literally jumped at the sound of my voice.”

“To save a life, the gift of saving a life, who can say that they have done that? Not enough of us,” said Traci.
She smiles her trademark smile when she says, “We have so many great things that are happening to us. It’s empowering. We want to share it with others. Listen. Whatever you’re up against, you too can find this empowerment within your own personal struggles.”

Marcus Tang
I have a pair of beautiful twins - 2 girls, age 3 and an active toddler - boy, age 6. Life is never the same like before, especially after my wife gave birth to my girls. As we attend to different needs for each child, it has been a challenging process for both my wife and I. However, I am thankful to be blessed with such a big family and the joy my children have brought to us.
http://Wonderma.sg