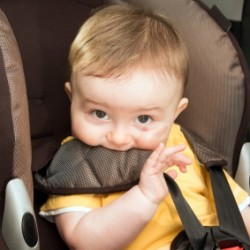 Shopping for baby items are one of the favorite things to do for most parents. According to a recent study conducted by Duke University showed evidence of a chemical linked to cancer and hormone disruption was found in the urine of all babies. The sources could be of baby things such as car seats and other baby products.

The chemicals are called TDCIPP (tris(1,3-dichloro-isopropyl)phosphate) and TPHP (triphenyl phosphate). Four years ago, Duke Researchers found TDCIPP in 36 percent of the baby products they tested that were purchased between 2000 and 2010. In the new study, the same research group tested the urine collected from 43 babies for evidence of TDCIPP and TPHP, and the results were alarming.

These chemicals were alarming as the new study conducted showed that each babies tested had levels of a chemical produced when the body processes TDCIPP, known as a metabolite. And the new study was closely related to the number of infant products their parents owned.

This study should serve as a warning for parents to consider thorough research before shopping baby items. Let’s choose items that are free from chemicals.

Makiyo San
Moved to Singapore for 10 years. Got married and had a baby girl. Enjoy Singapore culture and local food. Spends most of my time taking care of baby these days.
http://Wonderma.sg